Photograph above was taken by Kevin Patience in 1968 while he was on a detachment with 39 Sqdn (Canberra PR aircraft) from RAF Luqa, Malta.
When I was there in July 68 to Oct 69 the mid section fell away leaving just the fore and aft sections.
Kevin returned, on a Nimrod from RAF St Mawgan, in 1986 and the whole ship had disappeared.
I returned to the island myself in 2014, with the Oman RAF Veterans Association. The horizon looked strangely empty without her.

Some, including myself, have mistakenly called her the SS Electra which has caused some confusion when trying to find the history. She was originally launched as the Barrington Court in 1924, renamed SS Leon De Nervo in 1948 and SS Eletric in 1951. Renaming was quite common when ships changed owners.

Kevin, who took the photograph, also posted the following on 'Wrecksite' website'

"The ship was on a voyage from Goa to Lubeck with a cargo of iron when it grounded off the northern tip of Masirah Island close to the R.A.F. airfield on 16 August 1960. The RAF crew made contact with the ship's crew who initially refused assistance.
An SOS transmitted by the Eletric was picked up by the tanker Ras al Ardh which arrived and rescued the crew who were put ashore at Suez. A salvage attempt re-floated the vessel but it subsequently re-grounded and broke in front of the bridge.

I was based at Masirah in 1968 and took the attached photograph. In April 1977 the wreck was used for target practice and two months later broke up in the cyclone that severely damaged facilities ashore. In 1986 I revisited the wreck site and there was nothing left apart from scrap metal.
"
http://www.wrecksite.eu/wreck.aspx?103714
Update 26 November 2018 from Vic Osborne. 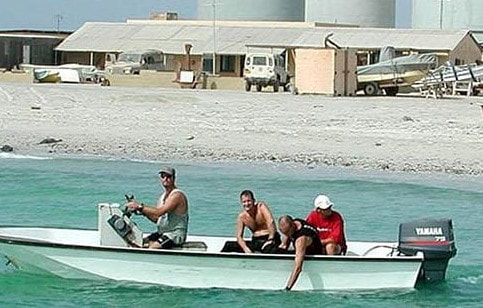