Please feel free to use the links on this page but please bear in mind that although I have been to the sites and they appear genuine I cannot guarantee the accuracy of their content.

If you find any of them don't work please let me know through the 'Contact' page.

MESOTHELIOMA HUB - Information for Veterans
https://www.mesotheliomahub.com/
Although this is a U.S.A. website the information is relevant to all veterans.
Mesothelioma is a rare form of cancer that is the result of exposure to asbestos, a fibrous material that was used in thousands of products until the 1980s. There are three different types of mesothelioma, which are determined by their location within the body.
It is without doubt that the UK Military establishments and equipment used asbestos before it was banned in the 80's.

A paragraph from a UK site https://www.asbestos.com/mesothelioma/uk
People in the UK who worked in the shipbuilding industry prior to the 1980s and who served aboard a ship containing asbestos are at high risk for asbestos exposure and mesothelioma. Ships are notoriously loaded with asbestos insulation and asbestos parts.When ships are retro-fitted, maintained or repaired, there is a risk of asbestos fibres becoming airborne. ​

lSouth of Masirah, on the mainland, is the small town of Mirbat. Not far from Salalah it was the key to the route to Muscat for the Adu rebels trying to take over Oman in the 60's and 70's. In 1972 there was a battle fought by nine SAS Regiment personnel against approxitely 400 Adu.

The story is recounted in the Daily Mail at this link.
​www.dailymail.co.uk/news/article-2027061/How-British-heroes-entered-SAS-legend-fighting-400-bloodthirsty-fanatics-bullets.html

Pete Winner - Soldier 'I'
Mirbat is also featured in the excellent book by Pete Winner (Pete Warne in the Daily Mail story). It was Pete's first major conflict as part of the SAS and he went on to other famous conflicts such as the storming of the Iranian Embassy, Falklands, Northern Ireland. It also covers the brutal selection period for 'The Regiment'.
The book is 'Soldier I' and can be obtained via the website www.soldierisas.com/store
email Pete for prices at soldiereye@aol.com

​Have you seen or read 'War Horse' or other films about the role of animals in war?
We all know about the dogs used in Afghanistan and Iraq, sniffing out drugs and explosives. They have been known to be very heroic in their actions to protect their handlers and other troops they are operating with.
During the 'Great War' of 1914-1918 millions of animals, horses, camels, donkeys, dogs, even pigeons, were lost in the service of our cause.

Now there is an association that cares about such animals, along the way they also give a forum for people who have lost their beloved pets, whatever sort of animal they may be.

Association lapel pins, Himalayan Blue Poppy wreaths and other items, are available to enable you to support their cause.

This is the site for anyone that had anything to do with the RAF bases in Malta during the years. Includes sections for aircraft, squadrons, 1151MCU, theatre group, memories. There is also an active forum.

RAF GAN was one of the most popular postings as far as unaccompanied posts go. Based on the southernmost island, of the southernmost atoll, of the Maldives GAN was a tropical paradise with a lagoon and white sandy beaches.

The Shackleton Association was conceived and founded in 1987 by John Botwood, who quickly assembled a dedicated group of mainly ex RAF members who had been associated with the Avro Shackleton during their service career and who were determined that the memory of this great aircraft should never be forgotten.

It is hoped to get WR963 back into the air. Please look at the link above (at the beginning of the text). There's a link for WR963 on the website.Facebook page is https://www.facebook.com/avro.shackleton

There's a number of sites around about holidays in Masirah, unbelievable for those that were there in the 60's and 70's.

LINK BROKEN - If anyone knows of a new link please let me know.

Yes, there were Pongo's there as well and they have some great photographs on this website
Click Here

Since their  formation, MAMS team's have been heavily involved in any Operation that have required British forces to be deployed. The other area that the Sqn has been heavily tasked in support of are disaster relief operations. Without MAMS, it is difficult to see how an Operational deployment or Disaster relief could succeed or happen without undue delay.
Click Here

On the UKMAMS website there is a page about the history of RAF Masirah, including a list of the Station Commanders from 1944 through to 1975.

'Turtle Beach Golf Club' link, it's all just a matter of time before a 'Masters' tournament is held there. I'm sure we all have many happy memories of 'The Browns' and the sound of 'TWANGGGGGG' as our golf balls split and unravelled after hitting sharp rocks!
Some good photos of present day Masirah.
Click Here

An association dedicated to the past members of Trade Group 11, would include present as well but technology has moved on and the trade group was disbanded in favour of ICT (Information Communication Technology) trade, members of which are also very welcome.
Annual re-unions are held and information is on the website. Many people have been reunited with old friends through the association.
Click Here

Ray Stokes has a website that would be of interest to any Boy Entrant but particularly those from 45th Entry.
Click HERE to go to the website.

The Museum opened in August 2013 and has been supported, by the public and local companies, beyond our initial expectations.
The Jet Age Museum is based in Gloucester and exists to show the amazing contribution that North Gloucestershire made to the UK aviation industry and the Gloster Aircraft Company in particular.

Take a look at the museum website for information about the collection.
If you wish to become a supporting member of the museum an application form is available on the website or at the museum itself.
If you are able to volunteer you would be very welcome, receive appropriate training and be part of a very proud team.

Avro Vulcan XM655 was third from last of the Vulcan bombers produced for the Royal Air Force, being delivered in late 1964, and was part of the UK's nuclear deterrent force throughout the 1960s and 1970s. It is now owned by Wellesbourne Airfield, and is looked after by 655 Maintenance and Preservation Society (655MaPS) which is a volunteer organisation of Vulcan enthusiasts.

XM655 is one of the few Vulcans remaining in ground running condition, the only one with the most powerful of the engine variants (Bristol Olympus 301s) and 655MaPS aim to keep it running for as long as possible. The aircraft systems are powered up and exercised regularly, engine ground runs are carried out several times every year, and a "Fast Taxi" event is carried out every summer to show off the aircraft and raise funds to support its preservation.

For any of your modelling needs or desires you have to visit Antics model shop in Gloucester. Aircraft, Vehicles, Railways, diecast models, RC Flying Models, Tanks, Trucks and Boats. the list is huge.

The Association's objectives, as defined by the constitution, are: To promote the efficiency of the Royal Air Force and preserve its traditions by maintaining contact between past and present members of Bomber Command and Strike Command, fostering esprit-de-corps and comradeship.
To support the charitable work of the Bomber Command Hall (of the R.A.F. Museum) and other projects which educate and inform the general public in the work and history of Bomber Command and the V-Force.

Anyone remember Gerry and wonder what he's up to nowadays. Well, he's still on the radio but in Panama City, yes - the Republic of Panama can you believe.
How amazing it is how we get spread around the globe.

Help keep this icon of British design alive at Robin Hood Airport (fka RAF Finningley) to inspire the young of today into Science &  Engineering, and to tell them about the history of the V Bomber era. (Yes, that's me in the photo below!)
XH558 is still fast taxying and is housed in Hangar 3. 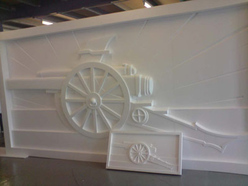 EXPANDED POLYSTYRENE SUPPLIES Established in 1970, are proud to have celebrated their 40th year of trading in 2010. They have been producing some amazing and unique products using Polystyrene, supplying to a range of clients large and small, perhaps their biggest claim to fame is supplying many of the store decorations to a very famous Knightsbridge department store!

The photograph is an example of an EPS produced moulding, ideal for displays in Museums, associations etc. 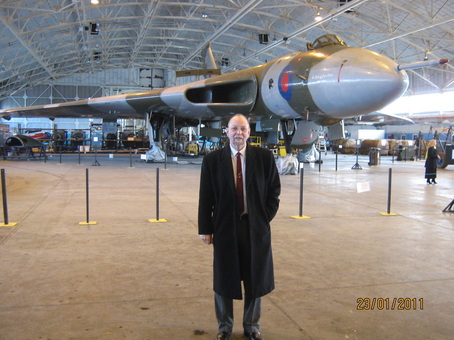