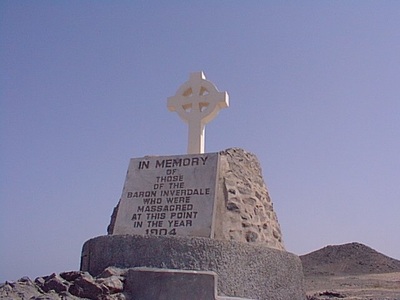 There is a monument on a beach in Masirah dedicated to the slaughter of crew members from the Baron Innerdale.
The stone mason that created the monument incorrectly carved the name as 'Inverdale' and this has never been corrected in all the years it has been standing there.
People might find it amazing that the monument has survived and has not been broken or mutilated despite the stone mason including a cross in the design of the monument. I think this is a reflection of the Omani tolerance of other religions.

As a result of the slaughter of the crew the Sultan of Oman at that time, Sultan Said bin Taimur who was the father of the late Sultan Qaboos bin Said (may he rest in peace), forbade the residents of Masirah from having permanent dwellings for 100 years. This was rescinded by Sultan Qaboos when he deposed his father in 1970.

A report of the event was published in the Times, 4 November 1904, and is reproduced below thanks to Terry Bate who sent it in.

Details of the ship are as follows, obtained from the Clydeside Site for ships built by shipbuilders in the area.
http://www.clydesite.co.uk/clydebuilt/viewship.asp?id=14790

The above photograph of SS Baron Innerdale is from Old Ships website.
http://www.photoship.co.uk/JAlbum%20Ships/Old%20Ships%20B/index5.html


Information about the Baron Innerdale can also be found on 'Wreck Site' website where another description of the incident is related by David Lowe (see at bottom of this page for this article which is copied from the Wreck Site page.
http://www.wrecksite.eu/wreck.aspx?132027

Remarks: Sank after a collsion with AFRICAN MONARCH. She was on her way to Calcutta with salt from Port Said.
Previous update by Bruce Biddulph
Additional data by George Robinson

Last updated: by George Robinson from the original records by Stuart Cameron

Extract from The Times, 4 November 1904, sent in by Terry Bate.
This may be the origin of the misspelling on the monument. 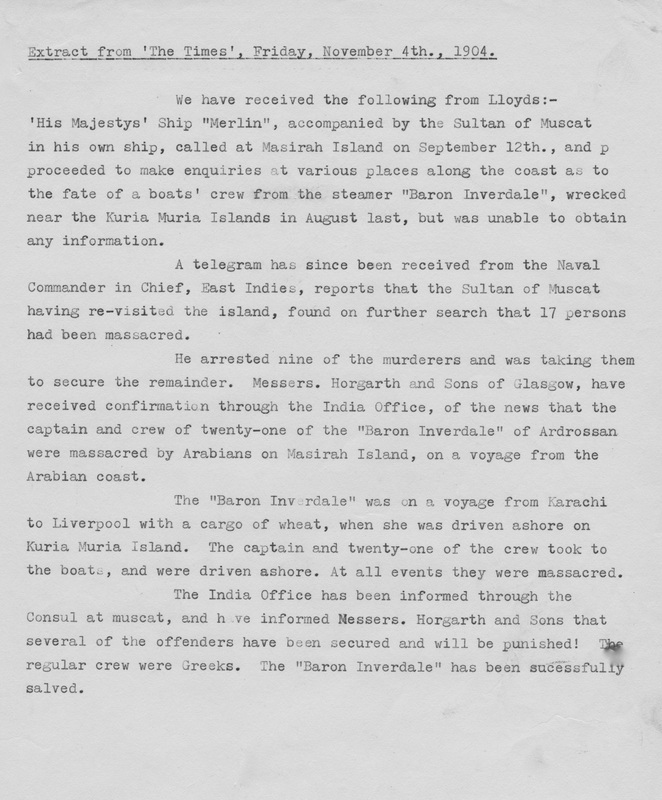 Hansard Lords Report on the events of August / September 1904
Copied from the  Millbank Systems website - http://hansard.millbanksystems.com/lords/1905/mar/21/the-case-of-the-ss-baron-innerdale

THE CASE OF THE S.S. "BARON INNERDALE."
HL Deb 21 March 1905 vol 143 cc599-600599*LORD MUSKERRY
My Lords, I rise to ask His Majesty's Government whether they have lodged any claim for pecuniary compensation for the families of the captain, officers, and other members of the crew of the British steamer "Baron Innerdale," who, after the stranding of that vessel, were treacherously murdered within the domains of the Sultan of Muscat; and, if not, whether, in justice to the relatives of the murdered men, and for the protection of the crews of British ships, they will take into consideration the advisability of laying such a claim. I understand that there may be difficulties in the way of getting compensation. What were I would suggest is that if it is not thought advisable or if it would be too expensive for His Majesty's Government to obtain satisfaction from the potentate in whose domains these British subjects were murdered, His Majesty's Government might themselves consider whether they could not make some grant to assist the relatives of these murdered sailors.

*THE UNDER-SECRETARY OF STATE FOR INDIA (The Marquess of BATH)
My Lords, the facts with regard to this case are as follows:—On August 2nd the steamship, "Baron Innerdale," stranded near Kuria Muria Island.
On August 6th—four days later—the captain and officers and a large number of the crew left the ship in two lifeboats, and about eleven days after that a passing steamer, the s.s. "Prome," rescued the remainder of the crew who had stayed on board. Of the two lifeboats that put away from the stranded vessel one has never been heard of. With regard to the other one, rumours reached the Government of India that her crew had been massacred somewhere on the coast, and after considerable difficulty the scene of the outrage was identified, the Sultan 600of Muscat affording every facility and himself proceeding to the scene of the murder. The result of the inquiries which were made and of the assistance which the ruler afforded us was, shortly, that the ringleader and nine of the murderers were executed on the scene of the murder. A number of other members of the guilty tribes, whose complicity in the murder was proved, are imprisoned at Muscat. The local sheikh has been removed, and the Sultan of Muscat has undertaken, with a view to preventing a repetition of similar outrages, to keep a guard of Muscat troops on the island during the south-west monsoon. The question of compensation about which the noble Lord asks me a question, was, I need not assure your Lordships, carefully considered by the Secretary of State in consultation with his advisers and with the authorities on the spot, and I regret to say that it was found impracticable to recover any appreciable amount from the tribes concerned. Some of them were too poor to pay anything, and others were in such a position of inaccessibility that it would have taken a considerable expedition to recover the sum. On the other hand, my Lords, in view of the goodwill which he had shown and of his prompt and energetic action in helping us to discover and punish the murderers, it was not felt advisable to press Sultan of Muscat on this matter. I might add that while we know from traces that were discovered that one boat's crew were murdered, we have no intelligence of the fate of the other, which I am afraid must have perished. We also have no knowledge as to which crew it was which was murdered, and it would be impossible, under those circumstances, to allocate any sums even if we were able to get them.

On 29th July 1904 the Baron Innerdale set off from Karachi, bound for Liverpool with a cargo of grain and timber. On 2nd August, during the South West monsoon, in thick, squally weather she ran aground on a small deserted island of the Kuria Muria group, about 25 miles off Oman's S.E. coast. At this time wireless was not used on ships and all that could be done was to wait until a passing vessel hopefully came to the rescue.

Later reconstructions of the mishap reveals that a few days after the ship went aground the captain and 21 of the crew took to one of the ships lifeboats, leaving 10 or 12 men on board the stranded ship, which was in no danger of sinking. It remains a mystery why the captain chose to leave the vessel or why he took so many men with him, but it is assumed that he inten ded to sail North along the Omani coast, using the assisting current to reach Muscat or the shipping lanes where he could find assistance. Some days after the departure of the captain, the steamer SS Prome sighted the Baron Innerdale, took off some crewmembers and duly reported the matter to Aden. The steamer SS Dalhousie then sailed from Aden to search for the missing crewmembers. One of the places she enquired at was the Omani island of Masirah, here they learned of the massacre of the captain and all but one of the crewmembers.

The only survivor was a cabin boy who was taken aboard the Dalhousie. Whether the captain had deliberately decided to land, or had simply been driven ashore by the monsoon will never be known, but it appears that on landing, the crew were met by the local sheikh. The Arabs were friendly at first, but at some stage in the proceedings one of the crew fired a pistol. Whether the crew feared for their safety in some way or there was simply an accident cannot be ascertained, but in the resultant fight twenty-one of the seamen were killed. The Arabs buried the bodies in the sand near Ra’s Qudifah, close to the Northern most point of the island. The ringleaders were later captured and punished; some received the death penalty and were also buried on the Northern tip of the island.

Ironically the Baron Innerdale, meanwhile, was refloated and under her own steam set out for Bombay where she arrived on 25th December and went into dry dock for repairs. In 1943 a group of airmen stationed on what by then was RAF Masirah, built a monument on behalf of the captain’s widow, this still stands at a spot that is believed to be close to the burial site of the crew, and although it is in the shape of a cross, by 2007 it had received very little damage. Unfortunately the mason who cut the lettering misspelled the ships name as Baron Inverdale, this has never been corrected. N.B. The Baron Innerdale sank after a collision with the SS African Monarch in the red sea on 27th October 1914.